War of votes as the battle rages on

The battle has been joined!

As the Video Song Tournament at the ChannelFix.com website reaches the second round (The Top 8), the war of votes rages on.

And as the Top 16 battle came to a close barely two days now. Iligan City’s Mitochondria Tagalog song “Lumalaki” and English song “Gazpachos” both qualified for Round 2.

Lost the battle but may have won the war

As the only Visayan song that made it to the Top 16, “Amiga” lost to votes against her #3 match-up in this Nationwide OPM Tournament’s search for the finest Filipino music. 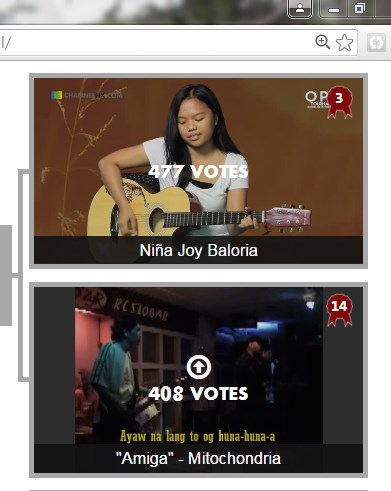 However, Mitochondria’s “Amiga” surprisingly won her new admirers from a number of first-time listeners then turned first-time voters coming from Iligan City according to a reliable source.

As fate would have it, the two “Mito” qualifying songs locked horns with each other as they match-up in this single elimination tournament’s bracket.

But whatever the outcome is, as this is a “People’s Choice” Tournament that is based on online votes, it’s the people that will decide whom to vote for, they have the last say.

The Plight of Mito

War of votes as the battle rages on in the Top 8 with five days to go before the next round begins, The Top 4!

The band hopes to get more support out there… hoping for the best!

Thank you and Good luck Iligan!

What’s music to one may be noise to another.

However, every band always have their circle of fans.

But no matter how good you are, musically speaking, it’s all but nothing when no one is listening.

A band is successful because of their fans, them beautiful people.

Success may come from a bands own effort but most of it comes from their fans loyal support.

Therefore, a bands success is not achieved but it is rather received.

But “true” success doesn’t belong to a band who achieves it but it truly belongs to those, the “fans” who give it.

So if by chance a band hits it big one day, they should never forget their fans and go astray.

Because getting full of oneself and big-headed only leads to your fans getting irritated.

A band shouldn’t forget who put them up there, it’s the people, the fans who were always there.